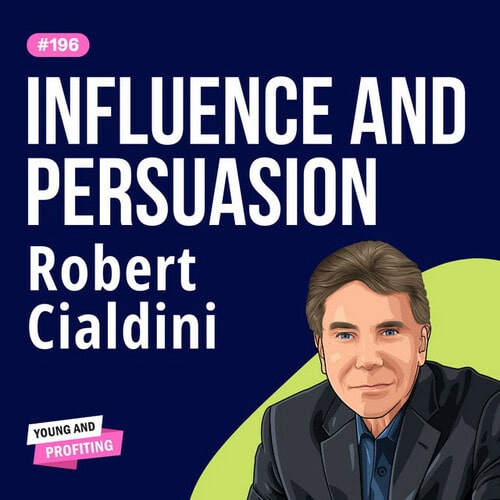 Robert Cialdini is known globally as the foundational expert in the science of influence. His Six Principles of Persuasion have become a cornerstone for any organization serious about effectively increasing its influence. His research is focused on uncovering why people say “yes” to certain requests and how to apply these findings ethically in the business world.

In this episode, Robert and Hala discuss how to become a skilled persuader and why that matters in business. Robert breaks down the tactics to recognize when we are being influenced so we can defend ourselves against it and make the best decisions for ourselves. They also discuss Robert’s 7 universal principles of persuasion: reciprocity, liking, unity, social proof, authority, consistency, and scarcity.

– How small changes in language can have big impacts on behavior

– The ethics of persuasion

– The power of reciprocity

– Why we shouldn’t downplay our favors

– How kindness can help us retain employees

– How to use the Liking Principle

– How to be perceived as an authority figure

– Difference between being in authority and an authority

– How can we use the scarcity principle in business?

– The importance of appearing consistent

Robert Cialdini is a Wall Street Journal and New York Times best-selling author, speaker, professor, and social psychologist who specializes in the science of influence. He has authored several books, and his latest book, Influence, is a new and expanded version of his classic international bestseller, which has been translated in over 30 languages and has sold over 5 million copies. As a keynote speaker, Dr. Cialdini has earned a worldwide reputation for his ability to translate science into valuable and practical actions. His on-stage stories are described as dramatic and indelible. Because of all of this, he is frequently regarded as “The Godfather of Influence”.

Hala’s LinkedIn Masterclass – Join Hala’s 2-day LinkedIn Secrets Masterclass and use code PROFITING at checkout to get 55% off! yapmedia.io/course

The Jordan Harbinger Show – Check out jordanharbinger.com/start for some episode recommendations

Shopify – Sign up for a free trial at shopify.com/profiting

Titan – Head to Titan.com/YAP and you’ll get a free $25 investment into another one of Titan’s portfolios.

Connect with Young and Profiting:

Enter your name and email address below and I'll send you periodic updates about the podcast.